Black Friday vs Buy Nothing Day 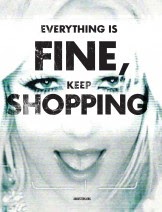 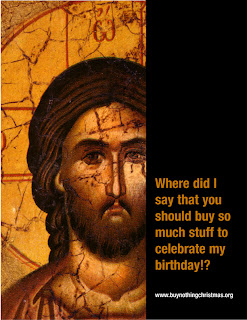 ﻿
BUY NOTHING DAY!
Draw something!

Build Something!
Make Something!
Ring a bell for the Salvation Army!
Buy Nothing!
Occupy Christmas!
What Would Jesus Buy?

The same folks that originated the Occupy Wall Street movement also started the idea of National Buy Nothing Day. Adbusters, a group dismayed at all the commercialism of Christmas that hit a high point on the Friday after Thanksgiving, came up with the idea of a "holiday FROM shopping". Twenty years ago, they started promoting the notion of "just saying No" to the whole thing. This year, the grotesqueness has grown some more, with a number of stores and malls opening ON Thanksgiving Day, in the evening or at midnight. Will we once again view video clips of herds of obese people, bursting through Wal Mart doors and trampling each other in their dash for the big-screen TV? America! What a country!

A number of cities are seeing their "Occupy" camps moving their focus, for this weekend, to the Buy Nothing Day. In Boise, for example, the large mall will see an invasion of "shopping zombies" between 2 and 3PM on Friday. You might as well have fun while making your point, right? As Emma Goldman put it long ago: "If I can't dance, I don't want to be part of your revolution!"

I don't think Adbusters imagined what the impact would be when someone posted the idea for Occupy Wall Street on the Adbusters' email chat list this last July 17th. One person, sharing an idea! The idea has taken on a life of it's own and doesn't seem to be departing anytime soon. Too many people KNOW that the "one percent" are really out there and that they are running our society into the ground in a constant quest for "more". Do other folks seem to notice that your friendly policeman now resembles a member of Seal Team Six? Perhaps THIS will be the year that Buy Nothing Day actually becomes part of the national consciousness. I have hope. Other than an online purchase of some ball bearings from overseas for my BMW repair activities, I will "buy nothing" today....

Hobomatt
I am in my early 60s. I am married and live on the near-Westside of Colorado Springs. I worked as a Registered Nurse and a factory-trained BMW Motorcycle mechanic time many years. I suffered a botched gall bladder removal that put me in a coma for 28 days. The hospital (Penrose) that I worked in (and that almost killed me) then fired me "because I could no longer do the work"! I tried working at a desk job (my first ever!) a year later and found that I could not even make that work. I am presently filing for Social Security Disability. I worked as a volunteer, at many agencies and places, for just about 40 years. There are MANY stories in those forty years! ****************************** “A human being should be able to change a diaper, plan an invasion, butcher a hog, conn a ship, design a building, write a sonnet, balance accounts, build a wall, set a bone, comfort the dying, take orders, give orders, cooperate, act alone, solve equations, analyze a new problem, pitch manure, program a computer, cook a tasty meal, fight efficiently, die gallantly. Specialization is for insects.” — Robert A. Heinlein"